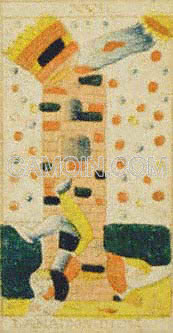 The deck of Jean-Pierre Payen is a bit distant from the traditional standard. The drawings here are treated with quite a bit of freedom. Thus we find flowers here and there throughout the deck, which have nothing to do with symbolism. Still, this deck was copied on older decks, retaining vestiges of them. This teaches us many things, keeping in mind that the one who made this deck first wanted to make a stylistic effect.

Jean-Pierre Payen was originally from Marseilles, but he was to settle in Avignon, the city of Popes neighboring the city of Marseilles.