1672: oldest Tarot de Marseille deck known to have been made in Marseilles. 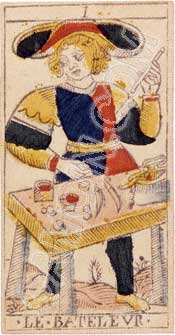 Here we have the oldest Tarot de Marseille deck known to have been made in Marseilles.

The Tarot of François Chosson was officially classified by the historians as being of unknown origin. Thanks to documents belonging to my grandfather, I was able to demonstrate in 2001 at an American forum composed of the best historians of the Tarot that this was a deck made in Marseilles.

This was an important revelation because the date written on the Two of Coins was 1672, which made it the oldest Tarot de Marseille deck known to have been made in Marseilles.

The date of the oldest Marseilles-made deck of Tarot de Marseille was again rolled back to 1608 due to my intervention and following the subsequent deductions of Professor Robert O’Neill. Until then, the date had been fixed at 1760. This made close to two centuries of difference, and the gap between the dates of the oldest Italian and Marseillan decks was thus considerably narrowed.

A debate took place on the subject, and some ventured the hypothesis that François Chosson had made a mistake in engraving the date, that it had actually been 1762. Nothing could be more untrue. Having designed myself a deck of 78 cards during two entire years and knowing the meticulousness necessary to conclude such a task, I can testify to the fact that it is absolutely impossible that an engraver who spent so much time and took so much meticulous care to carve a deck as beautiful as did François Chosson, could have make an error at the moment of engraving its name and date. It is absolutely impossible.

The François Chosson Tarot de Marseille deck thus dates from 1672 and this brings into question the entire History of Tarot.