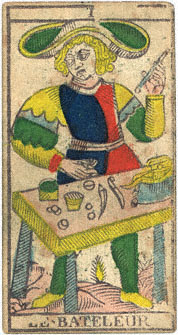 Nicolas Conver began to print his Tarot de Marseille deck in 1760 using the wood templates he had engraved. The 1760 edition of the Tarot was painted with the stencil technique. It abundantly contained sky blue and green. The Conver-Camoin factory continued to print these decks with the same wood templates and with the same colours for more than a century.
A century later, the wood templates were worn and the decks that were printed contained some defects compared to the 1760 edition. Here we show you an edition of the Tarot de Marseille of Nicolas Conver which was printed in the second half of the 19th century, when the templates were quite worn. A few years later, the arrival of the four-colour machines of the Industrial Revolution brought with it a new edition of the Tarot of Nicolas Conver in which the colours green and sky blue had disappeared. (See The 1880 Edition of Nicolas Conver)
/media/TdeM/anciens/marseille/conver_b/