Tarots said to be "Marseilles Tarots"

Send to a friend 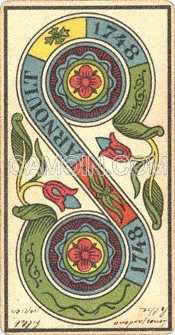 In 1898, Grimaud having taken over Lequart manufactured its deck signed Arnoult (1748). This deck is the forerunner of the "Ancien Tarot de Marseille" published by Paul Marteau 30 years later. In reality, it is actually a Tarot de Besançon.

This Tarot de Besançon is very interesting because Paul Marteau copied the drawings almost identically in 1930. He replaced their colours with others closely resembling those of the 1880 Camoin deck and gave the curious mix the name "Ancien Tarot de Marseille" (cf the book "Tarot and Magic" published by the Bibliothèque Nationale de Paris).

This 1898 Tarot de Besançon was copied on an older Tarot de Besançon of the cartier Lequart, an example of which can be found in the "French Museum of the Playing Card", Le Musée français de la carte à jouer (Issy-les-Moulineaux, France). The Pope and Popess are replaced by Jupiter and Juno. The colours are completely eccentric and their taste is not very pleasant.
/media/TdeM/anciens/dits_TdeM/Grimaud_Arnoult_1748/